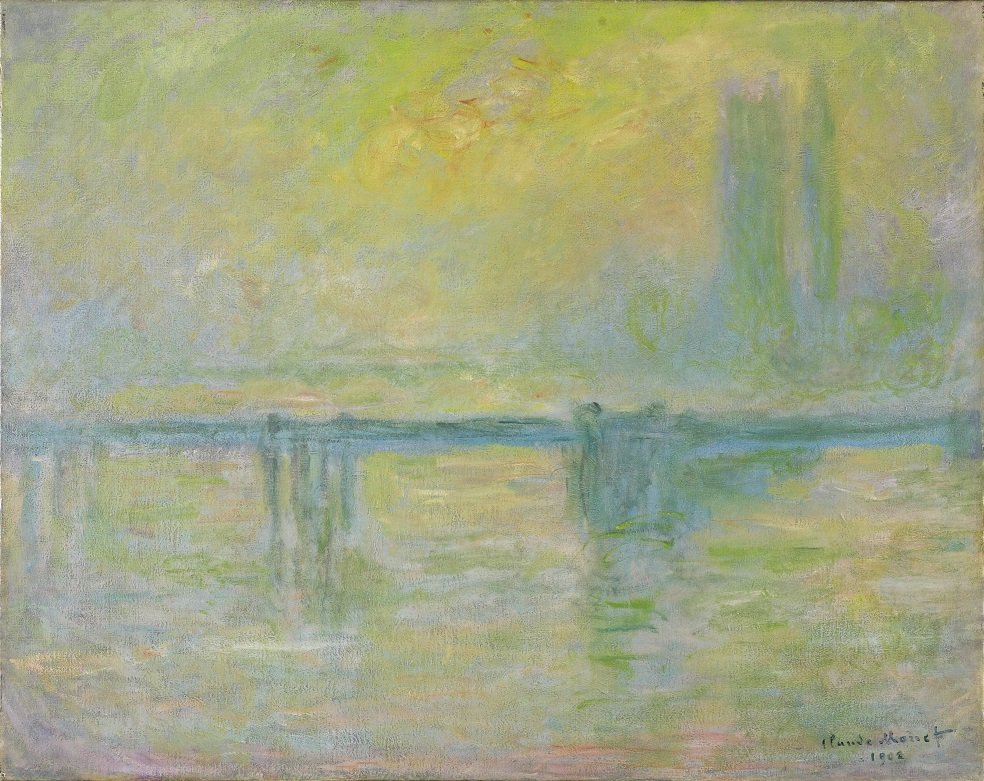 San Antonio, TX (September 20, 2021) – Bodies of water have long captured the imaginations of artists, particularly Claude Monet, who often explored the magical effects of light and atmosphere on water at different times of day. The McNay’s latest exhibition, Monet and Whistler in London, features rarely seen artworks from nine artists in the McNay Collection in conversation with a Monet masterpiece reflecting the River Thames in England. Admission is free for this exhibition every Thursday from 4 to 9 p.m.

On loan from the Art Gallery of Ontario in Toronto, Monet’s Charing Cross Bridge, brouillard (1902) shows one of the major bridges over the 215-mile-long river and the Houses of Parliament in the distance. The artist accentuates the effect of fog as it diffuses sunlight into a soft, golden glow. Other artists were similarly fascinated with the unique atmospheric qualities of the Thames, including American expatriate artist James Abbott McNeill Whistler. His lithograph Early Morning on view in the exhibition shows how the famous London fog creates a symphony of subtle gray tonalities.

Additional artworks include James Tissot’s Les Deux Amis (Two Friends), which depicts one man bidding farewell to another at the dock’s edge—a scene inspired by the excitement and adventure of travel. Winslow Homer’s Perils of the Sea highlights the dangers of the deep as women anxiously await their husbands with a roiling sea in the background. Additional artists focus on waterways as important arteries of commerce and industry, like Joseph Pennell’s Sunset, from Williamsburg Bridge or Otto Kuhler’s The Valley of Work.

Monet and Whistler in London presents many of these artworks for the first time in years, including John Marin’s studies of the Brooklyn Bridge. This exhibition also includes a contemporary woodcut by Yvonne Jacquette. Jacquette’s Midtown Composite focuses primarily on the skyscrapers of Manhattan, but also reveals a tiny sliver of the East River.

Monet and Whistler in London is organized for the McNay Art Museum by Lyle W. Williams, Curator of Prints and Drawings, Curator of Modern Art. The exhibition is on view in the Zilker Gallery through January 23, 2022.