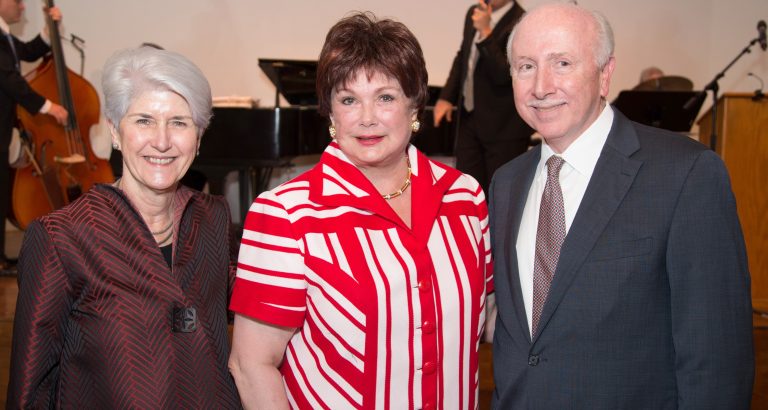 At the Tribute Celebration for William Chiego’s 25 years as leader of the McNay Art Museum, Marie Halff, emeritus museum trustee and trustee of the G.A.C. Halff Foundation, announced a $1 million donation to the McNay to establish an endowment for the acquisition of American art.

Museum supporters gathered on June 6th to celebrate the vision, intellectual curiosity, and creativity that have defined Dr. Chiego’s influential 25-year tenure as director of the museum. With this gift, the Halff Foundation honors Dr. Chiego’s, indelible legacy and dedication which transformed the McNay into an institution recognized internationally by peers and the public. Dr. Chiego, the second director in the museum’s 62-year history retires September 9th.

“The G.A.C. Halff Foundation has been a generous supporter of the McNay’s exhibition program for many years, and Marie and her late husband Hugh have been generous supporters of the museum personally.” Comments Dr. Chiego “This wonderful gift will be a substantial factor in the future growth of our American collection. Given Marie and Hugh Halff’s passionate collecting of American art, it is especially fitting that this endowment will support American acquisitions. Marie Halff has been a great friend to the McNay for many years. My wife Liz and I are touched that she would make this gift announcement on behalf of herself and G.A.C Halff Foundation Co-trustee, Tom Edson, at the tribute event in our honor.”

In addition to this generous gift and to celebrate Dr. Chiego’s legacy as director, the McNay has established the William J. Chiego Vision Fund. This fund supports the vision of growth and change for the museum that Dr. Chiego has always upheld. The McNay encourages everyone in our community to make a donation to this important fund. Contributions to this fund can be made easily through the McNay’s website at mcnayart.org/tribute.