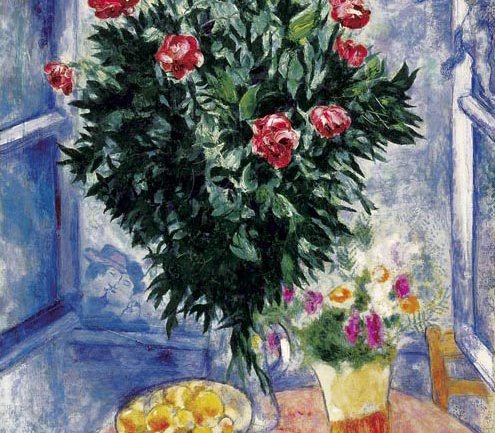 The exhibition presents the work of Robert Indiana, the artist widely known for his iconic LOVE sculptures and paintings. Nearly all of Indiana’s work is characterized by bold, simple, and brightly colored numbers, letters, symbols, and short words. In Beyond LOVE, more than 80 paintings, sculptures, and works on paper from public and private collections from around the world place Indiana’s work into a broader perspective by presenting the artist’s full range of work.

Described as “Shockingly exciting” by the New York Times, when it opened in September at Whitney Museum of American Art, Robert Indiana: Beyond LOVE has been critically acclaimed by the Wall Street Journal, New York Times, Art Newspaper, Vogue magazine, the BBC, and featured on Good Morning America. Visitors can now enjoy Indiana’s five decades of paintings and sculptures at the McNay.

The McNay is proud to be one of the important lending institutions to Beyond LOVE. Included in the exhibition are 12 costume designs from the opera, The Mother of Us All, which chronicles the life of suffragette Susan B. Anthony; a painting featuring Marilyn Monroe titled, The Metamorphosis of Norma Jean Mortenson, 1967; and Decade: Autoportrait, 1961.

Director of the McNay, William J. Chiego comments, “These works highlight a major theme of the exhibition: Indiana’s work as a commentary on the social and political issues of the 1960s, as well as the concept of the American Dream. Each was given to the McNay by the late Robert L.B. Tobin, one of San Antonio’s greatest arts patrons and a major supporter and friend of Indiana.”

In addition to Robert Indiana: Beyond LOVE, the McNay honors Robert Indiana and his work with two complementary exhibitions: Robert Indiana: The Mother of Us All, focusing on Indiana’s costumes for Gertrude Stein and Virgil Thompson’s opera about Susan B. Anthony, and Robert Indiana’s Hartley Elegies, featuring ten monumental screenprints by the artist, exploring the relationship between Marsden Hartley and Karl von Freyburg.

Born Robert E. Clark in New Castle, Indiana, renowned American artist Robert Indiana adopted the name of his native state early in his career. One of the preeminent figures in American art since the 1960s, Indiana has been a pioneer of assemblage art, hard-edge painting, and Pop art. Inspired by his first grade teacher to become an artist, he later enrolled in Arsenal Technical High School in Indianapolis. Indiana spent three years in the U.S. Air Force, then studied at the Art Institute of Chicago, Skowhegan School of Sculpture and Painting in Maine, and Edinburgh College of Art in Scotland. In 1956, he took up residence in Coenties Slip in lower Manhattan and joined a community of artists that would come to include Ellsworth Kelly, Agnes Martin, James Rosenquist, and Jack Youngerman. In 1961, the Museum of Modern Art acquired The American Dream, I (1961), establishing Indiana as one of the most important members of the new generation of Pop artists. He is best known for his iconic 1966 LOVE painting. Indiana has lived and worked in Vinalhaven, Maine since 1978.

Recently published by Yale University Press, Beyond LOVE, features artist Robert Indiana’s body of work from 1955 – 2007. The 286-page illustrated catalogue with essays by Barbara Haskell, curator at the Whitney Museum of American Art; Sasha Nicholas, an independent curator and art historian; and René Barilleaux, Chief Curator at the McNay. Through vibrant images and thoughtful analysis from leading experts, the catalogue assesses the development of Indiana’s career, as well as his relationship with other early twentieth-century artists, and his continued influence on contemporary artists today.

To request a complimentary press copy of the catalogue, contact Daniela Oliver de Portillo at 210.805.1754.

Admission to the McNay

Admission to the McNay ranges from $10 to $15 (for adults) and $5 to $12 for (students, seniors and active military) depending on the exhibitions and galleries on view. Admission is FREE for McNay members and children 12 and under. Please visit www.mcnayart.org for current admission prices. Entrance to Main Collection Galleries is FREE on H-E-B Thursday Nights (4-9pm) and on AT&T First Sundays of the Month. During FREE times, an optional admission charge applies only for entrance to special exhibitions.