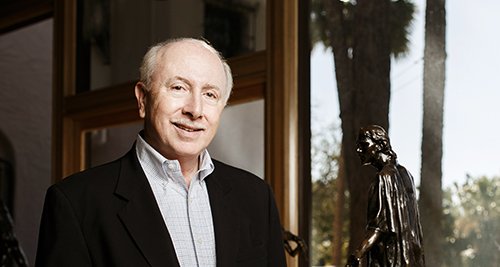 
San Antonio, Texas, June 7, 2017– Effective July 1, 2017, William J. Chiego, former Director of the McNay Art Museum, is appointed Director Emeritus; it was announced today by Toby Calvert, President of the Board of Trustees. This honorific designation acknowledges Chiego’s 25 years of visionary leadership at the McNay.

“The McNay Art Museum and San Antonio’s community are immensely grateful to William J. Chiego and his work in transforming the McNay into a world-class museum of the 21st century,” Calvert said. “What Bill managed to accomplish for the Museum will forever define artistic excellence in San Antonio. On behalf of the Board of Trustees, we proudly honor him with this well-deserved distinction”

Under Chiego’s leadership, the Museum’s collection more than doubled from 9,000 to over 20,000 works of art, and the McNay’s footprint nearly tripled to over 100,000 square feet. Chiego spearheaded a $51 million capital campaign, which culminated with the 2008 opening of the Jane and Arthur Stieren Center for Exhibitions. During his time as Director, he engaged San Antonio’s community with over 300 exhibitions, including O’Keeffe and Texas; Auguste Rodin: Selections from the Fine Art Museums of San Francisco; Intimate Impressionism from the National Gallery of Art; and Miro: The Experience of Seeing.


For more than half a century, the McNay has enchanted visitors with its art, architecture, and ambiance. The museum offers rich and varied exhibitions as well as rotating displays in the Main Collection Galleries from the 20,000 works in the collection; more than 45,000 adults, teachers, students, and families take advantage of a variety of education programs and innovative educational resources.


Admission to the McNay
Admission is FREE for McNay members and ALL visitors under 20. Entrance to the Main Collection Galleries is FREE on H-E-B Thursday Nights (4–9pm) and on Dickson-Allen Foundation First Sundays of the Month. During FREE times, an optional admission charge applies only for entrance to special exhibitions. Admission to the McNay ranges from $10 to $20 (for adults) and $5 to $15 for (students, seniors and active military), depending on the exhibitions and galleries on view. Current admission prices at www.mcnayart.org.