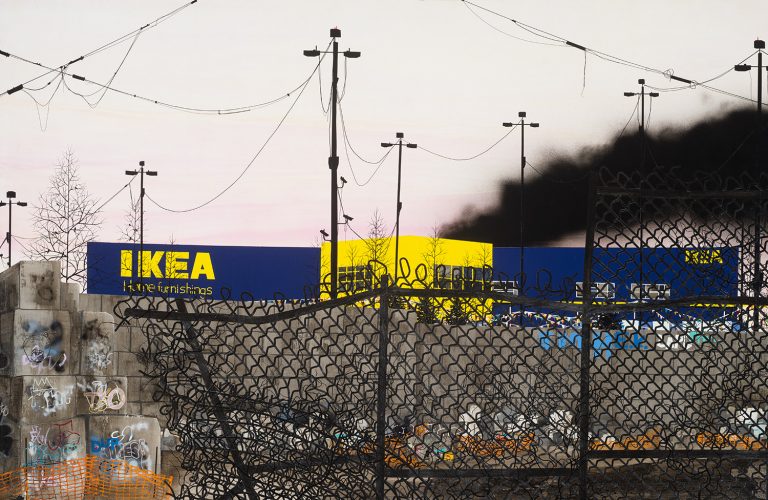 Erik Benson’s painting Dead Air, 2009, features a view familiar to the artist: the IKEA store that was built in Red Hook, Brooklyn, in 2008. Dead Air highlights the struggle implicit in the gentrification of this industrial neighborhood. The shiny, large, blue and yellow, boxy building clashes with the surrounding landscape of smoke stacks, graffiti, and broken fences. Benson uses a collage technique to literally build up the canvas by pouring paint onto a glass surface, and cutting the thin paint layers into his desired shapes once dry. The intricacy of this method emphasizes the mimetic relationship between the architectural subjects in the paintings and the process in which they are produced.

Benson, born in 1974 in Minneapolis, Minnesota, received his Bachelor of Fine Arts from the Minneapolis College of Art and Design in 1996, and a Master of Fine Arts from the Rhode Island School of Design in 2001. The artist was awarded a New York Foundation for the Arts Painting Fellowship in 2008 and named a Visiting Artist at Pratt University in 2012. Recently his work was exhibited at Edward Tyler Nahem Fine Art, New York, and Finesilver Gallery, Houston. Benson lives and works in Minneapolis and Brooklyn, New York.