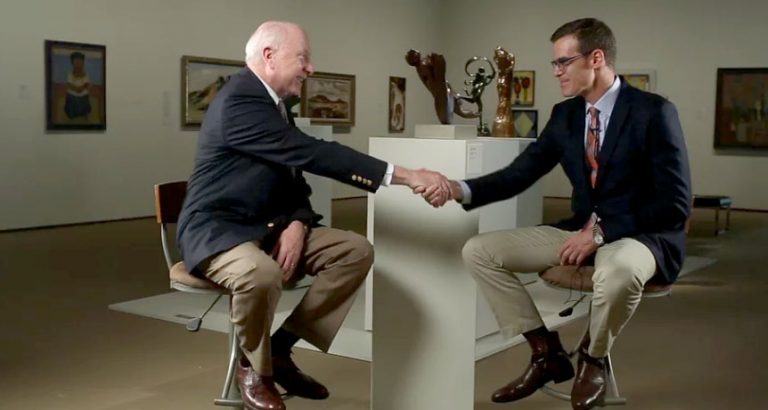 A Conversation with McNay Art Museum Directors from Rivard Report on Vimeo.

The McNay Art Museum selected Richard Aste, former curator and art historian from the Brooklyn Museum in New York, to serve as the new director of the museum following the retirement of longtime Director William J. Chiego, whose 25-year legacy left an indelible mark in the museum and the city.

The Rivard Report sat down with outgoing and incoming McNay directors inside the former Spanish-Colonial Revival mansion Friday and had them ask each other questions, provided by our freelance and editorial staff. They reflected on their shared passion for art, the museum’s transition over the years, and its bright future.

“I would say the perception of the museum has changed the most because when I came in 1991 it was very much a private place that I think the community regarded as not for everyone,” Chiego said as he recalled the McNay’s evolving audience. “Everything we’ve done has really moved the needle in the direction of being a museum that’s open for the whole community.”

Aste, a native of Peru with a doctorate of philosophy, art history, criticism and conservation from City University of New York, said he’s often asked what is going to change at the McNay under his leadership.

“My answer is: I’m not going to change. I’m going to build,” Aste said. “Museums have a moral responsibility to represent all of their communities. … It’s up to us to be on the right side of history.”

Friday, Sept. 9 was Chiego’s last full day at the helm of the museum. Aste assumed his duties as museum director Monday, Sept. 12.