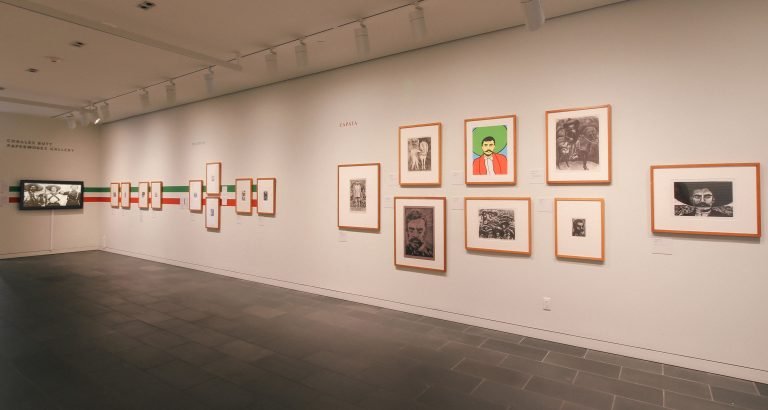 La Revolución Mexicana: 100 Years Later Marks Centennial of the Mexican Revolution with Works of Art From One of the Greatest Living Mexican Printmakers

Exhibition on View at McNay Art Museum through November 24

San Antonio, TX (August 29, 2019) – Opening today at McNay Art Museum, La Revolución Mexicana: 100 Years Later marks the centennial of the end of the Mexican Revolution (1910-1920) with a spotlight on Michoacan printmaker Artemio Rodriguez. His portfolio of 18 linoleum block prints created in 2010 to mark the 100-year anniversary of the beginning of the Mexican Revolution is on view together for the first time at the McNay.

The brilliantly contrasting black and white linocuts include portraits of prominent figures on both sides of the struggle. The artist’s portrait of dictator Porfirio Díaz and the Eurocentric nature of his rule strikingly contrasts the portrait of the great revolutionary leader, Emiliano Zapata, on horseback in rural Mexico with small farms and mountains in the background.

“Many Mexican families fleeing the violence of the Revolution came to San Antonio and surrounding areas in search of safety,” said Lyle Williams, McNay Curator of Prints and Drawings. “San Antonio’s ties to the Mexican Revolution run very deep, and the exhibition is timed to be on view during the city’s Diez y Seis celebrations.”

Complementing Rodriguez’s portfolio are prints from the McNay’s extensive collection of portraits of Zapata by Diego Rivera, Melanie Cervantes, Ignacio Aguirre, Sarah Jiménez, Francisco Mora, José Clemente Orozco, Luis “Teak” Rodriguez, and David Alfaro Siqueiros. Some of the exhibition’s contemporary portraits of the revolutionary are new acquisitions on view for the first time, and are a testament to Zapata’s enduring legacy in the social, political, and cultural life of Mexico.

A video by Cecilia Rascón highlights the roles women played during the Mexican Revolution, and features one of the most famous photographs of women in this moment—Soladeras by Geronimo Hernandez.

La Revolución Mexicana: 100 Years Lateris organized for the McNay Art Museum by Lyle W. Williams, Curator of Prints and Drawings. It is on view in the Charles Butt Paperworks Gallery through November 24, 2019.