Rashid Johnson: The New Black Yoga and Samuel in Space 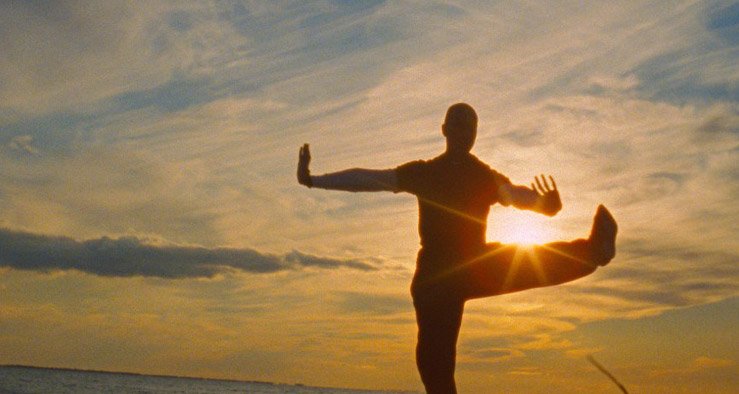 Rashid Johnson: The New Black Yoga and Samuel in Space

New York-based Rashid Johnson explores complex cultural identities and issues relevant to being African American in the present day. The artist’s recent ventures in film make use of the medium’s ability to express meaning through movement. The New Black Yoga, 2011, shows five young black men on a lakeshore performing movements drawn from yoga, tai chi, martial arts, and modern dance in a meditation on masculinity, race, mysticism, and communication through the body in movement. Samuel in Space, commissioned by Ballroom Marfa, Marfa, Texas, in 2013, continues the trajectory started in The New Black Yoga as a singular, totemic black male dancer observes the vast Southwestern landscape before him and dances through the desert at sunrise. In both works, the black male body is a site of reflection on histories past and progression towards rejuvenation and new meaning in the future.
Born in Chicago, Illinois, in 1977, Rashid Johnson works across the mediums of photography, sculpture, painting, installation, and film. He completed a Bachelor of Arts at Columbia College, Chicago, in 2000, and studied at the School of the Art Institute of Chicago from 2004 to 2005. Johnson’s mother is a retired professor of African history and his father an artist and owner of a small electronics business. Johnson’s work frequently deals with black intellectualism and the black middle class.