Located in the Tobin Exhibition Galleries

Located in the Tobin Exhibition Galleries 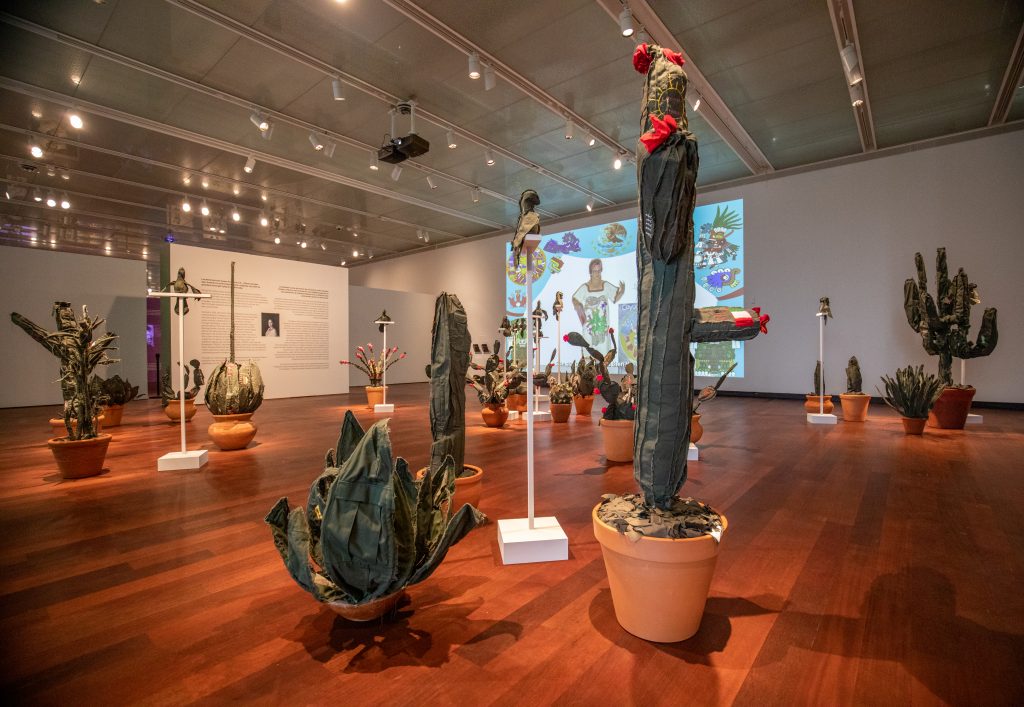 Located just two hours from the U.S.—Mexico border, San Antonio is a thriving Hispanic-majority city with its greatest strength lying in its diversity.

Margarita Cabrera: Blurring Borders presents a range of artworks, including those from the McNay collection, that focus on border relations and celebrate Mexican heritage. Through the artist’s practice of engaging communities in the creative process, Cabrera’s art honors the experiences, struggles, and achievements of those who have found their way—often through migration and extraordinary sacrifice—to new communities.

Started in 2010, the artist’s Space in Between series features interpretations of indigenous Southwestern plants fabricated from discarded United States Border Patrol uniforms. The series involves collaboration with community members through workshops, in which individuals embroider images and text about their own stories of migration and sacrifice. Blurring Borders includes work from Cabrera’s series Pepita para el loro para que hable o calle, inspired by Mexican parrots at risk of extinction due to the pet trade. The series’ title is from a Mexican proverb and in English translates to: A nugget for the parrot so that it speaks or stays quiet. The exhibition debuts two new bodies of work—TEQUITL and Flujo de Extracción. TEQUITL documents on video community members as they share stories of personal sacrifice. Flujo de Extracción is an augmented reality experience depicting three-dimensional renderings of Cabrera’s cochineal gouache on paper works.

Through her creative practice and resulting artworks, Margarita Cabrera highlights the stories that make up our diverse communities and celebrates our shared humanity.

Lead funding is most generously provided by Ben Foster in memory of his wife, Raye B. Foster. Major funding is provided by the Elizabeth Huth Coates Charitable Foundation of 1992 and Rick Liberto.

This exhibition has been extended by popular demand. Georgia O’Keeffe and American Modernism is organized with a focus on a wider, more…

The Studio, a creative interactive space, places the McNay’s mission of engaging a diverse community in the discovery and enjoyment of the…