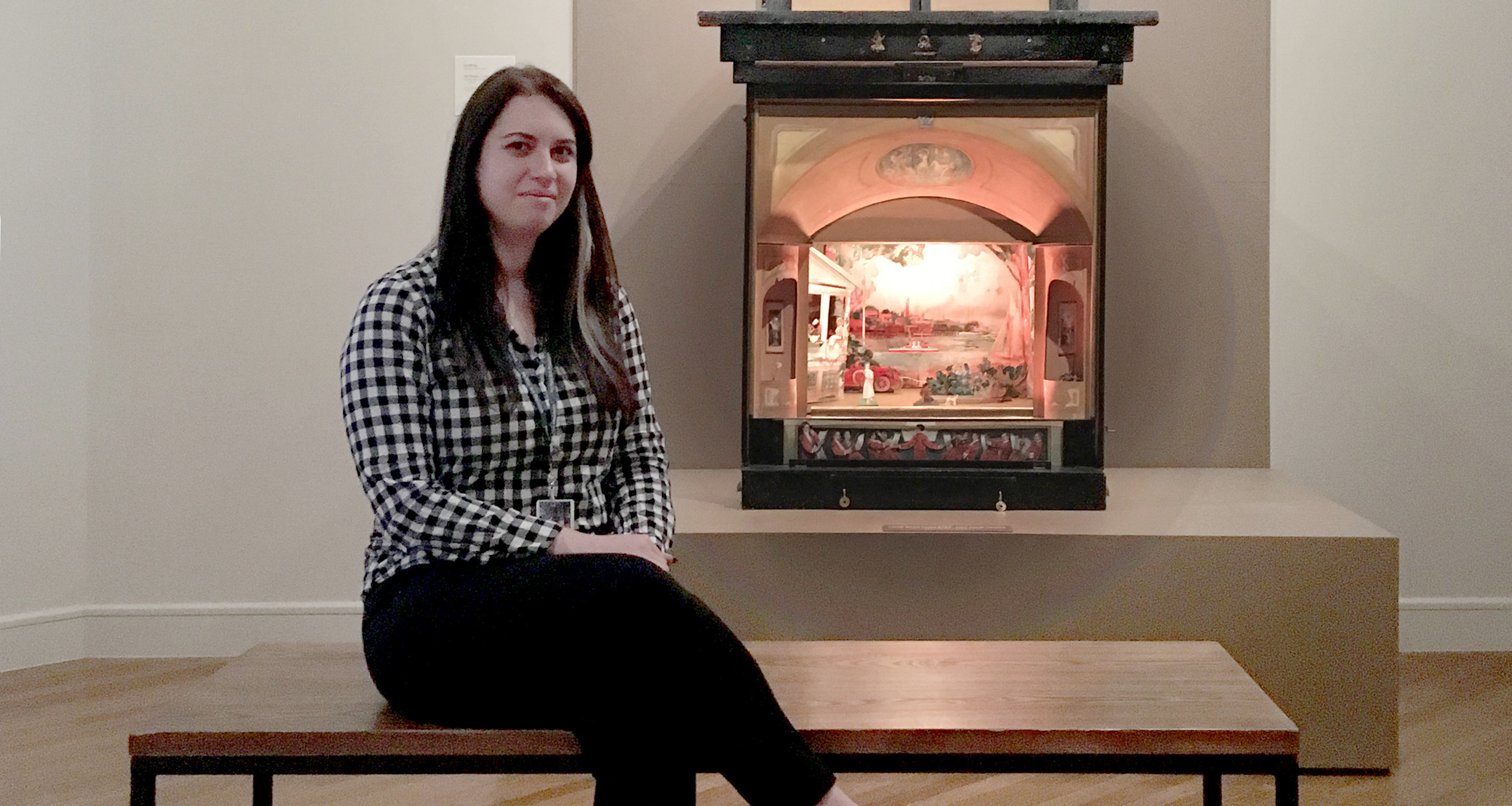 While vacationing at his Long Island country home in the winter of 1919, Ruloff Kip created a toy theatre for his young daughter, Elizabeth. The large, elaborate theatre features moving mechanisms, several working lighting schemes, and an array of set drops and cut-out characters, based on Kip’s house and family members. Long thought to be the work of artist Everett Shinn, recent research has uncovered interesting new perspectives on the theatre itself, as well as the fascinating background of its true creator and his family.


We sat down with Liz Paris, Collections Database Assistant and the exhibition’s curator, to learn a little bit more about the toy theatre that is currently on view.


A little history on the object:

We originally thought the theatre was made by Everett Shinn, an American Realist and member of the artist collective, the Ashcan School. Now we know it to have been created in 1919 by an artist and hobbyist named Ruloff Kip for his daughter, Betty. Because Kip came from a wealthy family, he had quite a bit of free time on his hands, and we learned that he made the theatre while vacationing at his second home in Long Island. In comparison to other toy theatres at the time, Kip’s theatre is exceptionally intricate and much larger than the store-bought, cardboard kits one could purchase. As an aspiring artist, Kip took several classes offered at the Metropolitan’s art school, including fabrication. This explains the large scale and elaborate detail of his toy theatre, which I believe he made completely from scratch. It’s definitely a very sweet gift for his daughter, who was his only child.


Are all the components of the theatre original?

All the parts are original, even the dried flowers, presumably. The conservator replaced the cotton string for some of the pulleys, drops, and other moving parts. He cleaned a lot of the scenery, but everything you see here is original.


What is the theatre made of?

The body and frame of the theatre are made of wood, and the rest of it is cardboard, paper, and found objects.


Why was the theatre originally thought to be a Shinn?

It was actually an Everett Shinn scholar who said it was by Shinn in the mid-1970s. Her main reason for believing it was by Shinn was the painted mural on the toy theatre, directly above the proscenium arch. It’s extremely similar to the murals Shinn painted in the Belasco Theatre in New York, and based on this and the fact that Shinn did make other toy theatres, she assumed it was by him. I don’t think she ever saw the theatre in person; I believe she just saw photos. Kip also painted murals in theaters, and his work looks like Shinn’s because Kip worked on similar projects, painted similar subject matter, and might have even seen Shinn working in the Belasco theatre.


When a conservator was working with the theatre a couple years ago, he found ‘Ruloff Kip, 1919’ written in pencil on the upper left side of the stage. At this point we still thought this was by Shinn, so we guessed that maybe he had Kip helping him because this theatre is so large and the other Shinn toy theatres are small. More research proved that Shinn had nothing to do with its creation, and Kip was the sole maker. 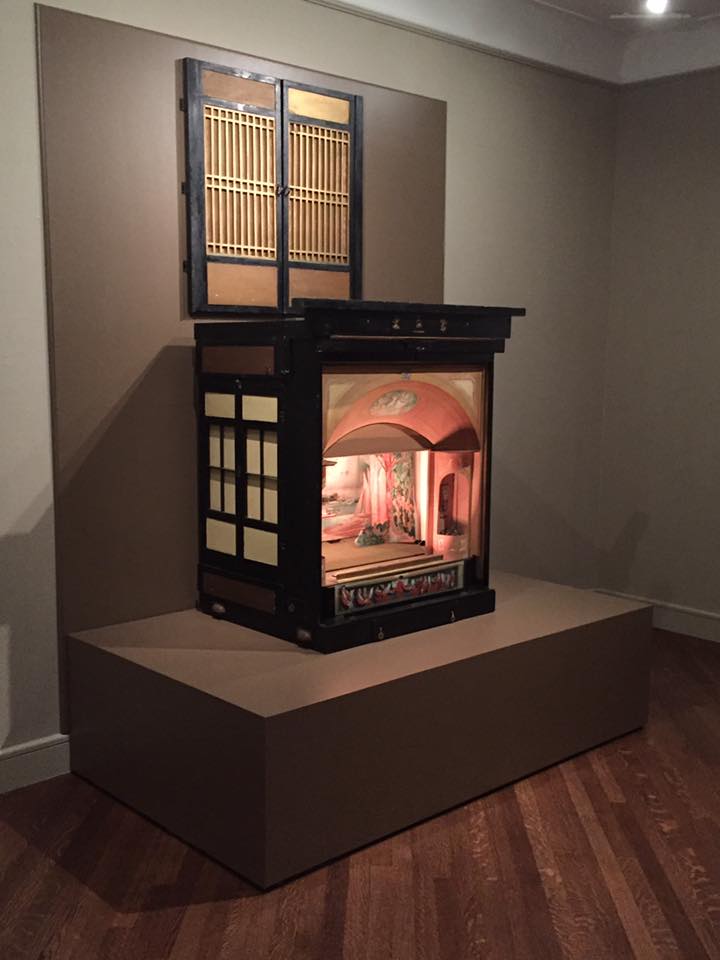 How long have we known this was by Kip rather than by Shinn?

When the conservator started working with it, there was a lot of grime on everything, and he found the signature under a layer of dirt. That was the first clue. It was known that Kip was a small-time artist, but it was difficult to find much more information at first. I had the conservator’s report when I started working with the theatre a year ago, and I began to really look closely a few months later when we got it back from the conservator. My research was initially based on just a name, date, and a couple auctioned paintings we found online. The affirmation that Kip is the maker has really been in just the past year.


What can we do to further authenticate the theatre?

If I could find more family photos or other documents discussing the theatre, it would be great, but unfortunately, things like that are very difficult to locate when the person in question is not particularly famous. The best bet would be to contact any surviving family members. I’ve located a few direct descendants, and we’re still working on getting in touch with them.


Can we identify the cut-out characters?

Keep in mind that this is somewhat speculative, but based on the few images of Kip and his family, we think that the cut-out characters represent Kip himself; his wife, Mildred; and a few different cut-outs of Betty so she could imagine herself in different activities or scenarios. Also, based on a couple articles I’ve read of Kip participating in dog shows, I believe the two dogs are their dogs. The background is the bay side of Greenport, Long Island, and the house is their home on Fourth Street, which still stands today.


What’s your favorite thing about the theatre?

It’s hard for me to really pick a favorite thing about it, but I would say the fact that it is so personalized is what makes it so special. The scenery is their life, their house, and their family, and to make this for a girl who was, at the time, four years old, is a pretty remarkable thing.