The Call to Give

Reflecting on our recent success with the #BigGive2017 this May 4th, it was amazing to see how Marion Koogler McNay’s legacy of giving to the community continues today through the generosity of so many donors. A whopping $29,834 was raised for the McNay Fund-A-Bus program, which will help transport thousands of area school children to the museum (many for their first time). Placing first in South Central Texas’ Arts & Culture category, we are truly fortunate to belong to such a devoted community who shares our passion for the visual arts.

While on the subject of devoted community and in the spirit of giving this May, let us also celebrate National Military Appreciation Month by honoring all military personnel who have served and continue to serve our nation. It’s important to recognize their ultimate gift and remember those serving on active duty in all branches of the military, together with veterans, retirees, and their families, who continue to give day after day. To show our appreciation, the McNay participates in the Blue Star Museums initiative, in which free general admission is offered to all active-duty U.S. military personnel and their families from Memorial Day through Labor Day. All things considered, I can’t help but feel how the month of May shall forever be synonymous with the selfless act of giving in San Antonio.

For anyone not familiar with the background of our museum’s founder Marion Koogler McNay, it’s worth mentioning she had an unyielding soft spot for both sharing her love and knowledge of the visual arts with her community, as well as supporting local military personnel and their families. In 1926, Marion moved to San Antonio and made this city home until her death in 1950. No doubt, her most enduring gift to the community is the bequest of her estate and some 700 works of art, along with her house and the surrounding 23 acres, which became the foundation of what is now the McNay Art Museum. As a passionate patron of the arts, Marion McNay’s philanthropic contributions enriched not only San Antonio’s cultural life, but the city’s military community as well. 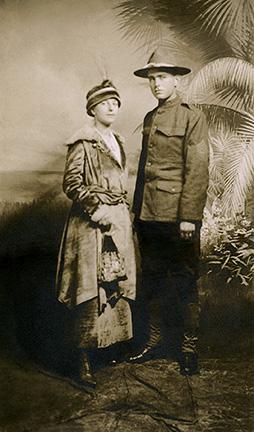 Ohio-born heiress Marion Koogler first visited San Antonio in 1918, shortly after her marriage to United States Army Sergeant Don Denton McNay on December 9, 1917. Don McNay had enlisted in the transportation department of the quartermasters corps during World War I and was called to active duty in Laredo, Texas, where the newlyweds lived together before he was sent to Florida. Don died later that year at Camp Joseph E. Johnson, an army camp in Jacksonville, Florida (now known as Naval Air Station Jacksonville). On October 25, 1918, Don McNay succumbed to uremic poisoning after contracting influenza, a victim of the 1918 “Spanish Flu” pandemic that killed millions. 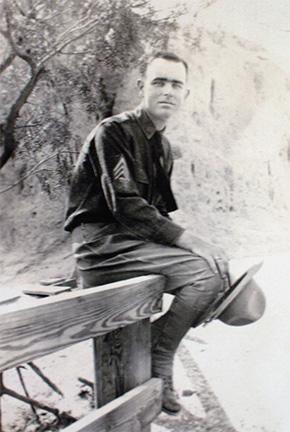 A widow after only ten months of marriage, Marion McNay would later remarry more than once before her death. Between subsequent marriages, Marion reclaimed her first married name, a sentiment that honored her first husband. Furthermore, Marion McNay’s call to give came when San Antonio experienced a severe housing shortage that occurred during the war years due to the influx of migration to the city, which continued even after the wartime. San Antonio was a hub of activity during World War II due to the presence of Fort Sam Houston, Camp Bullis, as well as Brooks, Kelly, Lackland and Randolph Air Force bases. She expressed her support of servicemen and their families stationed locally during World War II by having additional houses built on her estate as well as providing apartments in her home to help meet the housing needs for members of the Army. 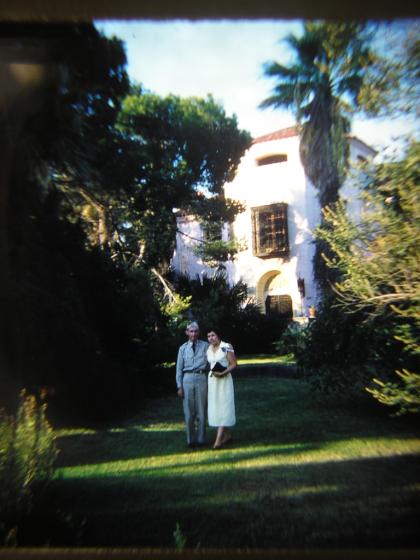 Following Marion McNay’s death and before the museum opened to the public in 1954, the McNay estate continued to host military personnel. One example was Jay M. Hallauer MD, who rented an apartment off the patio in 1952 while he was an army captain at Brooke Army Hospital in charge of the Outpatient Psychiatric Dept. Over five decades later, in 2006 the museum’s archives received a donation of photographs from Jay Hallauer that he took of the house and grounds with a Stereo Realist camera back when he lived at the McNay estate. Considering his 1950s era images had historic value for the museum, Jay Hallauer donated copies he made from his stereo slides and fondly recalled how “it was a great experience living in the museum (to be) in 1952 & relieved some of the tedium of the army at the time.” 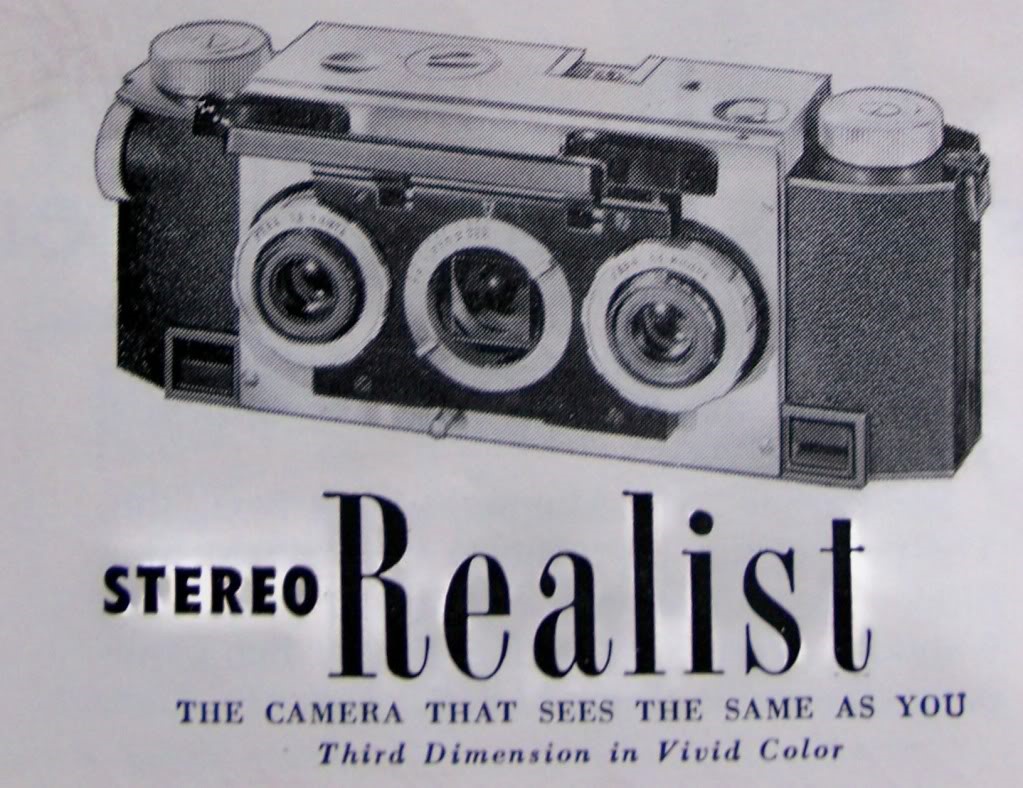 A side note for those curious about the Stereo Realist camera, it was a type of stereoscopic camera that captured a pair of pictures at the same time, corresponding to the viewpoint of the right and left eyes. The two pictures, mounted as a Stereo Realist slide and viewed together, merge to reproduce the original subject in “third dimension in vivid color.”

What I feel is the most significant aspect of Jay Hallauer’s photographs is in fact the color images! That’s because photographic images in the McNay’s archival collections from the 1950s are primarily black and white formats. Looking at the collection of Jay Hallauer’s photographs, it’s clear he was most interested in the many garden sculptures Marion McNay had placed about her estate. Looking at the photograph below, my favorite detail is that Hallauer managed to capture the façade of Marion McNay’s house in all of its pink glory—a rare color photograph indeed! 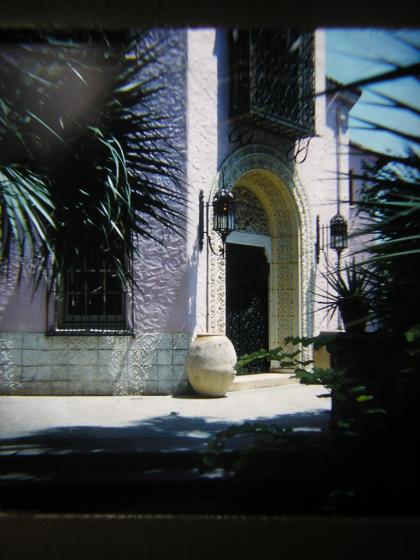 In addition to opening her home to active-duty soldiers during the war years, and veterans transitioning from military to civilian life after the war, Marion McNay also invited the San Antonio Art Institute (formerly the Museum School of Art) to operate on her Sunset Hills estate when it was in danger of closing in 1942. During a school board meeting in March of 1943, Marion McNay reported that she had given a non-army family residence in one of her apartments as a way to get bus service to the school, the man being the vice-president of the bus company. She recognized that there was a need for transportation service for the army-apartment families, students of the school, visitors to the school and art gallery, as well as members of the school’s board of directors.

Working with the Veteran’s Administration, commercial art training for veterans was provided at the San Antonio Art Institute under the GI Bill beginning on September 30, 1946. Previously to this date, morning classes in painting were held in the Sunset Hills Studio where instructors gave three criticisms per week and pupils were permitted to paint afternoons if they wished. Later, during a 1948 meeting of the school’s board, Marion McNay reported how she had given the use of her Cadillac car the past school year for transporting pupils to the bus line and that she further planned to purchase a station wagon for the same purpose.

In her time, Marion Koogler McNay, patron of the arts and a champion of our servicemen, fulfilled her call to give by sharing her home and her love of the visual arts with her community. Nowadays, the McNay Art Museum, with the support of our generous donors, continues her legacy of giving by transporting school children to the museum with the Fund-A-Bus program and honoring military personnel and their families by participating in the Blue Star Museums initiative. A big thanks to all of our supporters for helping the McNay Art Museum continue to give back to the San Antonio community!