Museum From Home: The Imitation Game

Museum From Home: The Imitation Game

A pioneering artist, brave traveler, and co-founder of the German Expressionist movement Der Blaue Reiter (The Blue Rider), Gabriele Münter embodies the Modern Art shero. As a young girl, she traveled with her sister to the United States visiting relatives in Marshall and Plainview Texas (1898-1900). In the years leading up to World War II, she took enormous personal risk by hiding works of art in her home in Murnau, a Bavarian region of Germany. Paintings by her romantic partner Wassily Kandinsky and others from Der Blaue Reiter movement were declared degenerate by the Nazi government, and Münter’s rebellious act preserved these works of art for generations to come. 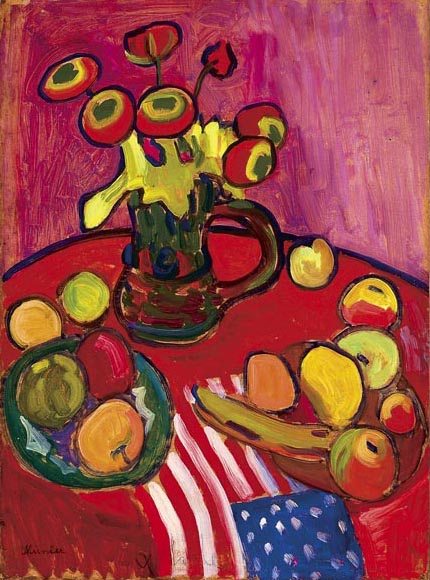 Gabriele Münter, Still Life, Red, 1909. Oil on board, mounted on panel. Museum purchase with the Ralph A. Anderson Jr. Memorial Fund, the Helen and Everett H Jones Purchase Fund, and the Alvin Whitley Estate, Collection of the McNay Art Museum.

A favorite painting in the McNay Collection, Gabriele Münter’s Still Life, Red, is characterized by saturated red colors, a variety of flowers and fruit, thick black outlines, and an American flag. As part of the #McNayStillLifeChallenge my daughters worked together to compose an imitation of Münter’s masterpiece.

As we worked, we talked about Gabriele Münter and how she took risks in her life and art. Traveling a long way from home, attending art school with mostly men, and hiding important paintings from the government were all big risks. A photographer as well as a painter, she photo-documented her travel to the States. See examples here.

1. When have you taken a family trip?

2. What did you take pictures of?

When an artist samples, borrows, or copies from another, art historians call it appropriation. Think of Jasper John’s American flags. For some the practice raises questions about originality, but it can also be a way to present familiar material in a new context.

1. Why do you think Gabriele Münter included the United States flag in her painting?

2. Why do you think the flag is one of the first things people notice?

The Milwaukee Art Museum has many paintings in their collection by Gabriele Münter. They even have a similar painting to the McNay’s entitled Yellow Still Life, 1909.

1. What did Gabriele Münter change and what did she keep the same?

2. How could you compose a contemporary still life that is monochromatic—all one color?

Explore the McNay Collection for more objects to imitate. Send us your still lifes at info@mcnayart.org or tag us on social media with #McNayStillLifeChallenge.