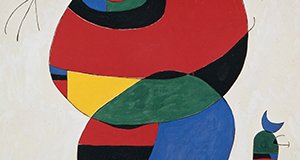 
Curator’s Corner is a place for McNay curators to discuss their thoughts about events happening in the art world–their world–both here in San Antonio and elsewhere. Here, Dr. William J. Chiego, McNay Director, reflects on a recent trip with his wife, Liz, to North Carolina where they viewed Mirò‘s work at the Nasher Museum of Art of Duke University in anticipation for the upcoming exhibition, Mirò: The Experience of Seeing, opening at the McNay September 30.

My wife and I recently traveled to North Carolina to see the exhibition Mirò: The Experience of Seeing / Late Works, 1963-1981 at the Nasher Museum of Art of Duke University. The exhibition will be coming to the McNay this fall, so this was an opportunity to assess how it can be installed at the McNay, as well as a chance to stay with family in nearby Chapel Hill. 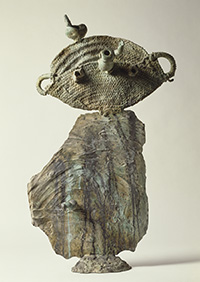 Liz and I came expecting vibrant colors and bold drawing, hallmarks of Joan Mirò, one of the great masters of the 20th century, whose late work is little known in America. However, it was something of a surprise to see the paintings and especially his sculptures in person. It is as if you are encountering another living being. I could not help wondering if Steven Spielberg had channeled Mirò when he made ET, The Extra Terrestrial in 1982. The works in the exhibition have a mesmerizing effect on children as well as adults seeing the show. I look forward to having many thousands of school children, who visit the McNay each year, and children of all ages, encounter these magical works at the McNay.