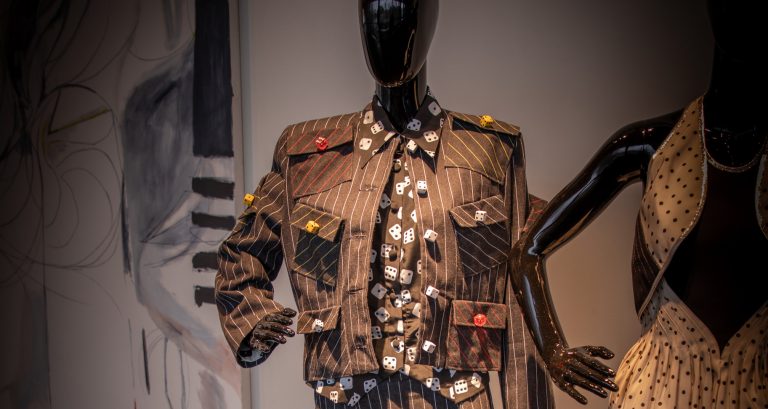 “I want my clothes to make you smile.” — Patrick Kelly 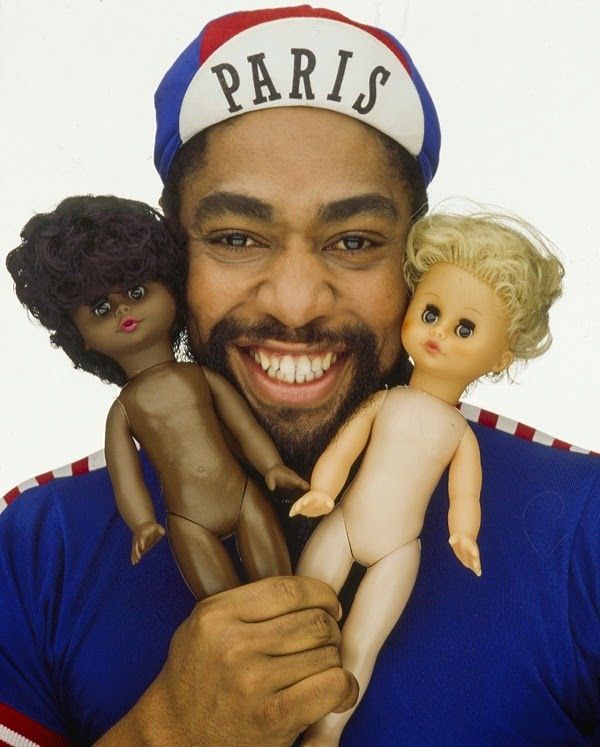 Characterized by oversized-buttons, animal print, body-conscious silhouettes, an abundance of dots, hearts, and stripes, Patrick Kelly’s joyful designs practically danced down the runway. (Observe runway footage from the exhibition Patrick Kelly: Runway of Love at the Philadelphia Museum of Art, 2014.) The ensemble on view in Fashion Nirvana pairs a pin-stripe pattern associated with menswear with a whimsical dice pattern on the blouse. Kelly had an affinity for interesting buttons, using actual dice as pocket button closures on the front and a few on the back too. Presenting patterns of black on white and white on black with playful, multi-colored dice speaks to Kelly’s fun-loving personality, but it also introduces visuals of gambling or counterculture within a high fashion context.

In 1979, legendary model Pat Cleveland purchased a one-way ticket to Paris for her friend and emerging designer Patrick Kelly. Cleveland and Kelly met in New York where she was one of his earliest clients. One of the first black supermodels in the United States, Cleveland is known for a runway walk that is equal parts dance and theatre. Kelly maintained a friendship/mentorship with Cleveland throughout his career, designing a Josephine Baker-inspired[1] ensemble for Cleveland to wear in his 1986 Patrick Kelly Paris runway show.

Born in Vicksburg, Mississippi in 1954, Patrick Kelly grew up in the segregated American south. His high school integrated during his senior year. Raised by his mother and grandmother who championed his love of fashion, Kelly learned to sew in elementary school. He attended Jackson State University before moving to Atlanta and then New York City. Struggling to break into the industry in New York, his career later exploded in Paris where he gained magazine attention from ELLE and retail investments from retailers Bloomingdales and Bergdorf Goodman. By the mid-1980s, Kelly’s clients included Naomi Campbell, Grace Jones, Madonna, Cicely Tyson, Isabella Rossellini, and Princess Diana of Wales. In 1988, Kelly was the first American and the first black designer to be voted into the Chambre Syndicale du Prêt-à-Porter in Paris, the prestigious and exclusive French ready-to-wear association. Patrick Kelly died on New Year’s Day, 1990 of AIDS. A beloved and generous designer and friend, Kelly’s vibrant and influential ensembles kicked off the body conscious aesthetic of the 90s decade.

As the subject of major museum exhibitions in Brooklyn, Philadelphia, and Atlanta, Patrick Kelly and his brand are increasingly relevant to current conversations about race and privilege. Eric Darnell Pritchard describes how Kelly confronted racism and prejudice through his personal style—baggy overalls. By reclaiming a uniform associated with Southern sharecroppers and laborers, Kelly both celebrates his heritage and challenges the stereotypes of race and class. In her article for Fast Company, Elizabeth Segran, discusses Kelly’s branding which includes a golliwog caricature. Reclaiming a symbol long associated with racist imagery and ideas was such a daring and deliberate choice. The smiling face, for example, aligns with the designer’s ethos of energy and joy, but the origin and associations with blackface and minstrel imagery identify a history of American racism and oppression rooted in performed entertainment. Robin Givhan, author of The Battle of Versailles, describes Kelly’s fashion and personal style as a combination of protest and performance.

Look no further than the recent Kelly Initiative to see how the designer continues to stand for equity. This call to action petitions the CFDA (Council of Fashion Designers of America) to make public the racial makeup of fashion companies and to sign a pledge creating equity for Black talent and hiring practices. It’s fitting that an initiative aimed at inclusion and equity would be named for Patrick Kelly, a designer who “eliminated the outside-inside division for everyone,” as stated by Gloria Steinem at his 1990 memorial.

[1] Baker was an American-born dancer and activist who rose to prominence in France and was the first black actress to star in a major motion picture—Siren of the Tropics, 1927