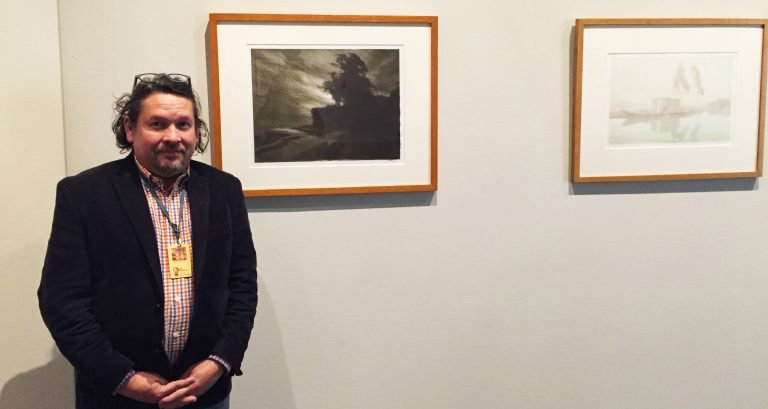 Q. What can you tell us about the current Dulac exhibition on display at the McNay through April 10, 2016?

A: When people think about 19th century French art they think immediately of Impressionism which was very much about looking at the exterior world and Charles Dulac is what we would call a Post-Impressionist and, in fact, there are aspects of his work that we would call Symbolist. That’s because instead of showing specific times of day and specific places, he’s much more interested in giving us a sense of emotion or expression or a sense of feeling. He doesn’t want you to look at these landscapes and say “oh, that’s such and such a place.” Rather, he wants you to have a sense of the feeling that he has when he’s looking at these landscapes; that’s a feeling of awe and reverence, feeling small when contemplating the grandeur of nature.

The show consists of two works of art: they’re both complete portfolios of color lithographs completed by Dulac in France in the 1890s.

Q. Charles Dulac was considered one of the greatest lithographers of the late nineteenth century and yet there is little known about him. What can you tell us about his life and his work?

A. Dulac had worked as a stage hand at the Paris Opera and at a very early age contracted lead poisoning because back then they used a lot of lead-white pigment. He realized he was going to die, and as a result, he became devoutly Catholic. He died at age 33. Because his career was cut short, he only produced these two portfolios and therefore he’s not that well known.

Q. The McNay is one of only a handful of Museums in the world that have both of those portfolios. This was a life’s mission of yours from your days in college, wasn’t it?

A. Yes, I had seen the first portfolio, Suite de Paysages (the Suite of Landscapes) back when I was at Yale, twenty-something years ago. I was looking around at galleries in New York City and came across the portfolio at Jim Goodfriend’s shop. I had a little bit of money to buy something for the art gallery at Yale, but the portfolio that I found was not in great condition so I had to pass it up. When I got to the McNay, I made it known to a couple of dealers that I would be interested in having that portfolio for us. A dealer managed to find a Dulac edition in superb condition and so we bought that. And then I went out on a limb and said if you ever find Dulac’s second portfolio, we’d have an interest, thinking it would never happen because they are so rare, but he was able to find that one as well in 2011.

Q. What is it about his Dulac’s work that appeals to you?

A. He had a very meditative approach to creating lithographs, and was actually very experimental. The images may not seem that complicated because they are very subtle in color. But the process that he went through was extremely laborious. Even within a certain edition he would often change the color of paper or the color of ink that he used. He would sometimes also use different printers for a single edition; he was always trying new things. Because of that, there are no two portfolios exactly alike; they have these variations that are really subtle.

Q. In creating the exhibition you had to create the “experience” that Dulac wanted people to go through when viewing his portfolios. How did that come together?

A. His whole idea was that—unlike how we see them up on the wall in frames—the idea was that you would sit down and look at a portfolio of these images one by one, and it would be this very meditative, contemplative process, much like how he created the images in the first place.

I knew there would have to be a compromise because I couldn’t have it out for people to leaf through. To show the whole thing, we had it matted and framed. You’re supposed to take your time and once you begin looking, you sort of fall into that meditative mode naturally because you become fascinated by all of the details he puts into the landscape.

Q. In your mind, as a curator, what makes this exhibition so special?

A. It continues a tradition that we have at the McNay of collecting entire print portfolios, that’s something that we’re known for.

This is the first time we’ve shown both of our complete Dulac portfolios together publicly, so this is a wonderful opportunity to see this little known treasure in the collection.