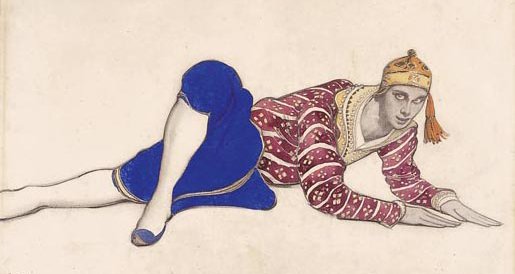 Robert L. B. Tobin, namesake of the Tobin Collection of Theatre Arts, once wrote a dedication to his mother, “For Margaret Batts Tobin, who saw Nijinsky dance in Austin.” Robert often heard the true story – in 1916 his mother, 18-year old Margaret “Mag” Batts, drove from San Antonio to Austin to see the famous Russian ballet dancer Vaslav Nijinsky (1889–1950) perform.

That night, Margaret felt the electricity of Nijinsky’s performance and experienced transformation through art. For decades that followed, Margaret Batts Tobin nurtured San Antonio’s cultural life and served as the McNay’s Board President for nearly twenty years. Margaret, captivated by Nijinsky during her lifetime, eventually acquired a painting of the dancer by Russian artist Léon Bakst (1866-1924).

Similarly, Robert L. B. Tobin spent his life supporting the arts in San Antonio, Santa Fe, New York City, Spoleto, Italy, and cities across the globe. Robert and his mother created many opportunities for people to experience the spark of live performance. Robert Tobin also amassed an unrivaled art collection of rare books and priceless objects that document the history of theatre – which he gifted to San Antonio through the McNay Art Museum. One breathtaking object in the Tobin Collection of Theatre Arts is an iconic photograph of Nijinsky by Eugene Druet (1868–1917).

It is not a coincidence – Robert Tobin’s 1910 photograph by Eugene Druet is the very image used by Léon Bakst in 1917 to create the painting of Nijinsky that his mother, Margaret Batts Tobin, loved so much. Explore the Druet photo and the Bakst costume design using the McNay web site.

R. Scott Blackshire is Curator of the Tobin Collection of Theatre Arts at the McNay Art Museum. His doctorate from The College of Fine Arts at The University of Texas at Austin examines the ways in which artists meld their needs, values, and beliefs into creativity, artistry, and entrepreneurship that reflects their diverse communities.