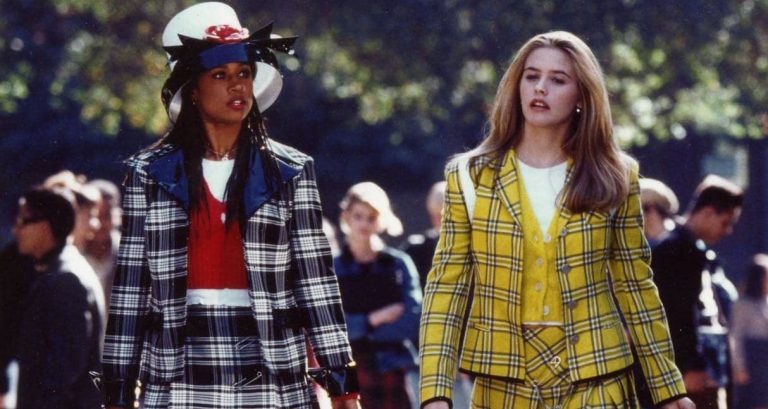 One year ago, my colleague and co-conspirator Jackie Edwards—currently in the Ph.D. Program in Art History, The Graduate Center, City University of New York—and I met with Brian Silva, McNay Graphic Designer. Our mission: brainstorm ideas for a totally nineties exhibition logo for Fashion Nirvana: Runway to Everyday. Channeling Cher Horowitz’s bright yellow plaid suit from the film Clueless (1995) was at the top of my 1990s mood board, and I even requested to see a version incorporating her character’s aggressive yellow plaid ensemble.

Brian ultimately steered us in a much more elegant and optically pleasing direction with a gradient design that formed our exhibition color palette. The hues from the logo design informed decisions about wall color, pedestals, extended labels, and section texts. (See exhibition video here and curator mood board here.) That said, I thought the timing of the 25th-anniversary of Clueless might be a chance to pay homage to Cher, Dionne, and coordinating plaid ensembles. 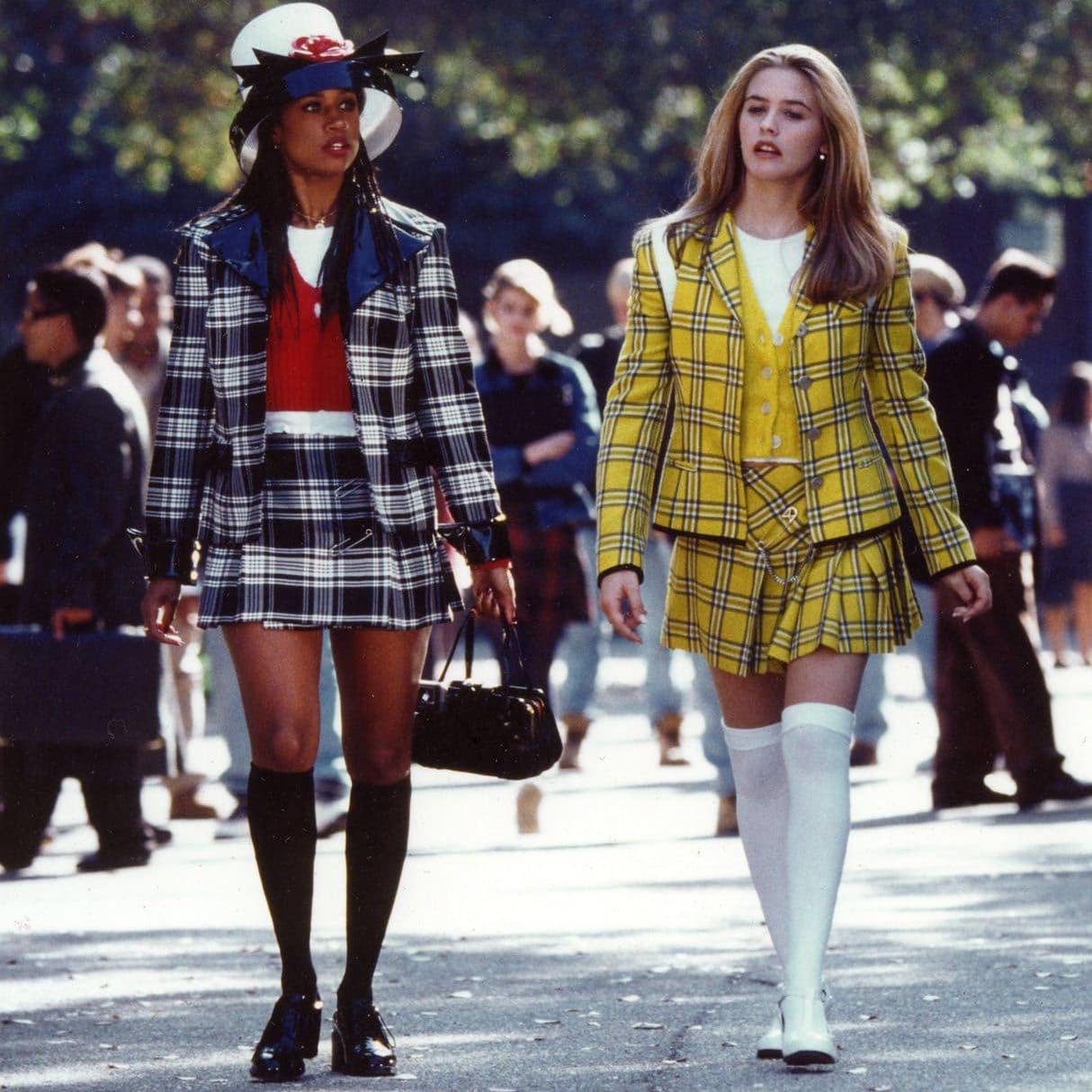 Recognizing how high school students communicate identity via fashion selections, writer and director Amy Heckerling scripted confident smart heroines who dress accordingly. In visiting Los Angeles high schools in the nineties, Heckerling and costume designer Mona May observed the liberal application of grunge—baggy pants, oversize shirts, lots of plaid, and very little femininity. Applying a lens of privilege and fantasy (including a computer program for coordinating ensembles), Heckerling and May created an aesthetic so specific to the film—over the knee socks, mini-skirts, hats of all sizes, Mary-Jane shoes—that fans continue to imitate the iconic designs. Actress and singer Willow Smith, for example, channels her inner Cher, even though the film came out five years before she was born.


Mona May describes how luxury brand Dolce and Gabbana created Cher’s yellow suit, and she fabricated Dionne’s black and white version. She also reasoned that Cher and Dionne would have the resources to visit Europe and import luxury brands. Designer Karl Lagerfeld, who assumed leadership at Chanel in 1983, paid tribute to the couture house’s signature hallmarks like bouclé tweed, a knotted plaid. In 1994, he updated the classic look with brightly colored plaid, faux fur, extra high hemlines, big hats, and Mary-Jane heels. Sound familiar? Although the film’s relatively modest budget would not allow for Chanel price tags, May likely drew inspiration from this collection that premiered before the film came out. 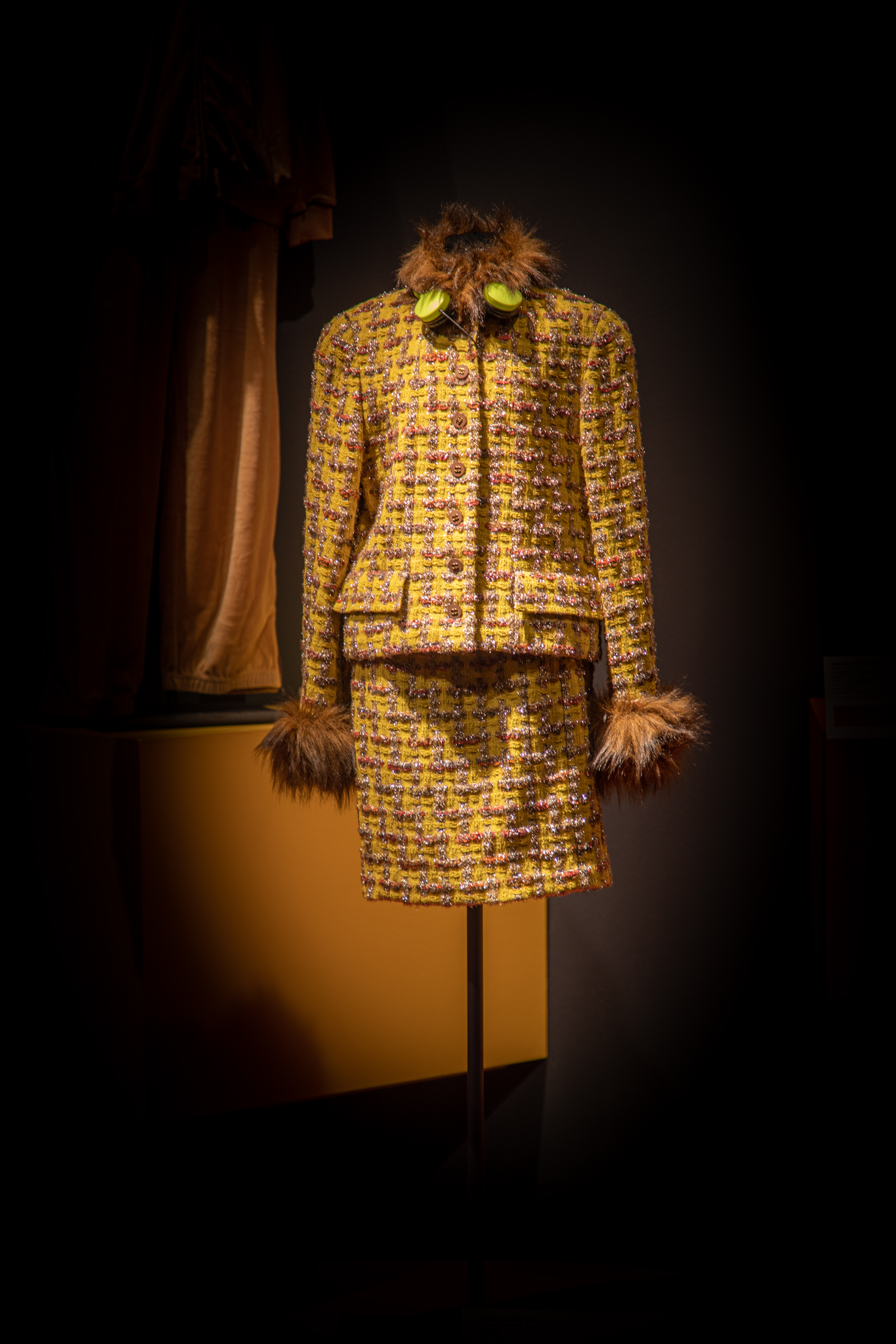 In one of the more quote-able lines from the film, Cher challenges a thief at gunpoint refusing to lay on the ground because her dress was made by Alaïa, ‘a totally important designer.’ Tunisian designer Azzedine Alaïa originally studied sculpture and pioneered a body-conscious silhouette that celebrated an hour-glass shape. Supermodel Naomi Campbell said, “No other dress can make a woman look and feel as good as an Alaïa because it cinches a woman’s body perfectly.” Find a powerfully cinched silhouette on view in Fashion Nirvana: Runway to Everyday in a black and white plaid motorcycle jacket and dress. Alaïa lifted the checked pattern from Tati, a discount Paris department store with checkered branding.

My father, a minister who rereads Jane Austen novels regularly, took me to see Clueless when it came out in 1995. He voiced disapproval of some casual marijuana use, but we both liked the story back then. In high school, I was enchanted by the California fantasy and appreciated the contemporary update of Jane Austen’s Emma. Looking back now, I’m much more aware of the essential role fashion played in the film and the way in which Amy Heckerling and Mona May communicated complicated teen identity through layered, often aspirational appearance.