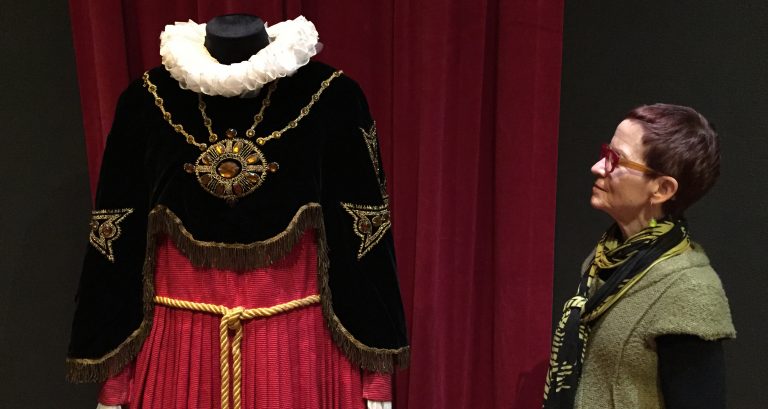 Q: What was your vision as you chose costumes and drawings for Dressed to Kill: Glam and Gore in Theatre?

A: I just really wanted to focus in on some of the productions for which we have drawings for just about every costume, every character in the opera or musical, and so I combined those two ideas focusing in on all of the villains of theatre, of which there are many.

I think Femme Fatale characters come to peoples’ minds first, but I am very much into gender parity. The exhibition focuses on half male and half female characters.

Q: When watching a production, we often get so immersed in the story line, that we may not consciously recognize the storyline that the costumes themselves tell. Is that by design?

A: If costume design and set design are done well, they aren’t calling attention to themselves for their own sake and detracting from their performances or the ensemble. What I discovered and visitors will discover with this exhibition is how important costumes can be in establishing

The character of the individuals so that you know immediately who’s the villain, who is not, or in setting the mood.

A: One of the characters is from the Puccini Opera Turandot, maybe not as well know as Madame Butterfly, but she is sort of a legendary Chinese princess who’s taken a vow of chastity, and when princes come from all around the world to try to get her hand in marriage, she sets a trial for them where they have to answer riddles. Of course, none of them answer them and so it is “off with their head.” Throughout, the lyrics of the opera talk about her being like ice. So, at the beginning of the opera, what color is she wearing? Blue of course! And then at the end when a prince comes along and finally answers the riddle and she falls in love with him, you can imagine what color – she’s goes to gold and then she goes to red. All of that symbolism is built into the costume.

Another one of the female characters is Carmen from Bizet’s opera. She has different personas and different costumes, but I think everybody knows her as a gypsy. Of course, you look at her costume which is that bright gypsy red and it’s the same color the red rose that traditionally she sort of throws at the feet of the young soldier, who will fall in love with her with tragic consequences. That ends up being like the pool of blood whenthe young soldier, at the end of the opera, comes back and stabs her. There is a lot of color symbolism and other kinds of symbolism.

Another one of the rich productions, the most recent one and the only Broadway musical as opposed to opera, is Lestat, which is based on Anne Rice’s novels. There are costumes for the chorus in which the fabric – mind you these are 19th century dresses, women in skirts, men in top coats and top hats, the pattern that is printed on them is like the veins of trees or the circulatory system and, of course, Lestat (a vampire) is looking at them and he is feeling quite thirsty.

Q: Can you tell us more about what we will experience at this exhibition?

A: This exhibition is a combination of drawings from 5 productions plus more than a dozen costumes from Don Giovanni from the Met, for Lulu from the Met also, and Lestat, which was a Warner Bros. production.

Q: Murder and Intrigue are such popular themes. It is curious why we are so attracted to evil characters in fictional performances?

A: I think when you’re talking about overblown, larger than life characters and emotions and passions, you may have those about love, but maybe not about happily ever after! Even though the love may be sincere, you might have a tragic end. In the case of Dressed to Kill: Glam and Gore in Theatre, it’s all murder and mayhem, nobody dies a natural death.

In terms of storytelling, we all know those villains that you just love to hate and you know they are just despicable but you’re rather interested in them.

I think a number of productions in this exhibition are not only larger than life, but also quite timely. Don Giovanni, for example was 18th century, so imagine how different the audiences were then and now, and how have people talked about Don Giovanni since then? He’s “a great ladies man”, “he’s a seducer”; well no, he was really a sexual predator, and directors in the last couple of decades have been treating it as such. So that he’s not just up in the woman’s bedroom reciting poetry to her. Some of the productions have been quite graphic, something that’s the case where the plot has additional meaning for us today that it might not have back then.


Dressed to Kill: Glam and Gore in Theatre is now showing at the McNay through June 5, 2016.