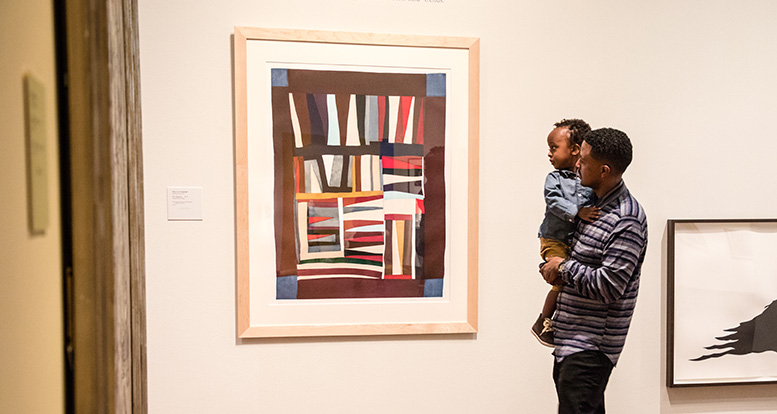 Mary Lee Bendolph (born 1935) is one of the best known of the Gee’s Bend Quilters whose artwork references traditional African American and Amish quilts, as well as stylistic influences by European artists including Paul Klee and Henri Matisse. Gee’s Bend is a small, remote, black community in Alabama whose population is comprised mostly of descendants of slaves. Bendolph’s bold and improvisational compositions capture the eccentric geometric patterning that distinguish the textile work of Gee’s Bend – a quilting tradition from which she was trained – whose countless patchwork masterpieces and cultural legacy date as far back as the 1920s.

In 2015, the NEA presented three female artists from Gee’s Bend – Mary Lee Bendolph, Lucy Mingo, and Loretta Pettway – with the National Heritage Fellowship award which recognizes individual artists for their artistic excellence and for their continuing contributions to the nation’s traditional arts heritage.

Recently, artist Amy Sherald cited Gee’s Bend quilts as a major creative influence while painting former First Lady Michelle Obama’s official portrait. She recalled that the dress that Obama wore reminded her of the Gee’s Bend quilts that women made over the course of their lifetimes, recognizing quilting as a huge part of black culture.

Click here to learn more about the #5WomenArtists campaign, led by the National Museum of Women in the Arts!